Except for two cellars, the museum is completely wheelchair accessible.

Madelon Hooykaas. To Be or Not to Bee 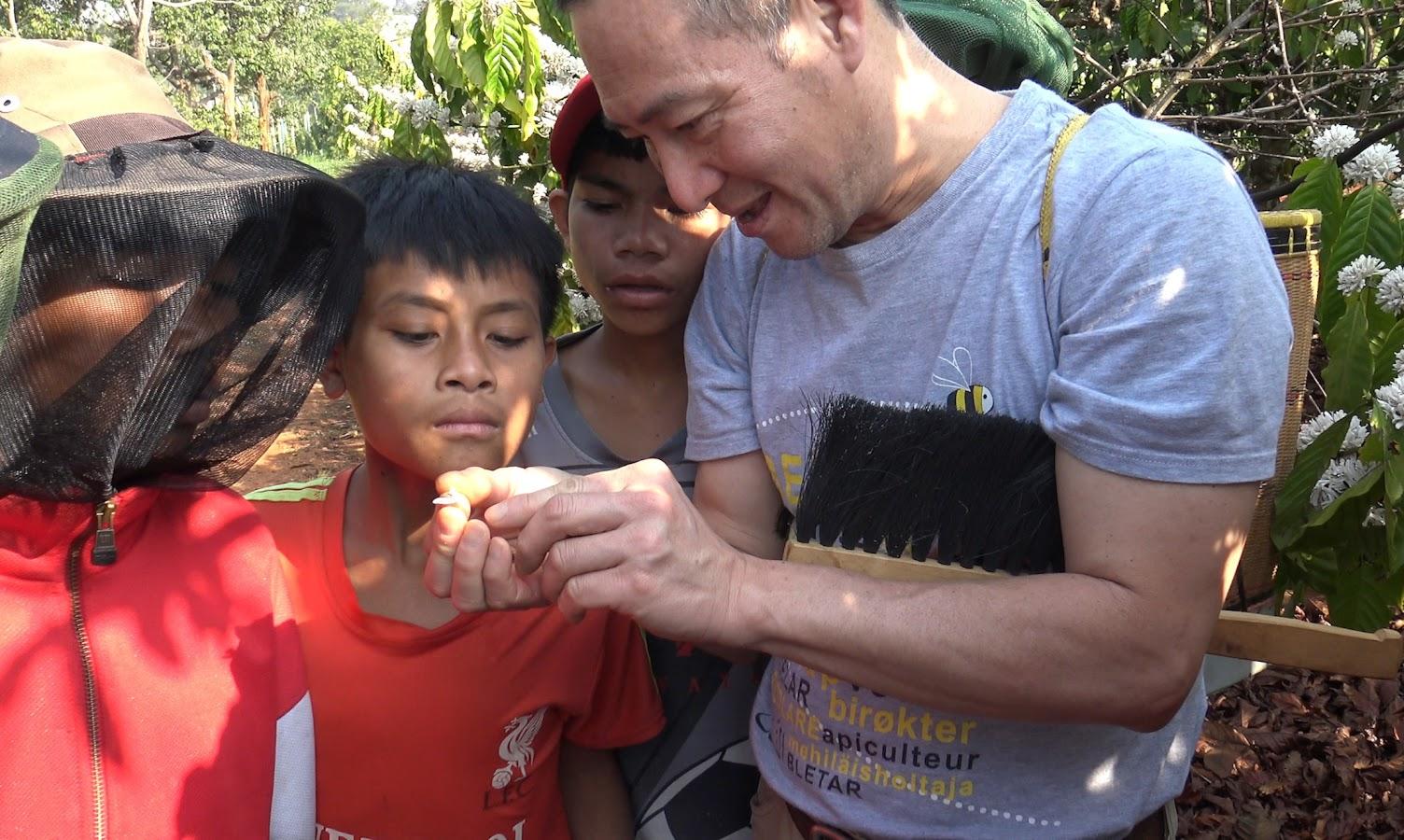 The exhibition To Be or Not to Bee by Madelon Hooykaas is on view at Museum Rijswijk from 24 April to 12 June 2022. The exhibition makes a connection between the Nature Garden in the Wilhelminapark in Rijswijk, where the Vietnamese beekeeper Hung Nguyen keeps bees, and the project in Pleiku in Vietnam, where he teaches beekeeping to orphans and young people. In 2020, Madelon Hooykaas made the film Dharma Nectar on this subject.

Earlier that year, the artist produced the short video To Be or Not to Bee for the exhibition The World After in the Oude Kerk in Amsterdam. In the film, she refers to a prediction attributed to Albert Einstein: if the bees die out, then humanity must start to worry. Both films are on view at the exhibition. In addition, several other works by Madelon Hooykaas are on view, as well as a calligraphic work and a beeswax sculpture by Hung Nguyen.

Madelon Hooykaas hopes the exhibition will encourage viewers to reflect on the current crisis in which bee populations find themselves, as a result of human activities.

Madelon Hooykaas (Maartensdijk, 1942) is known worldwide as a pioneer in the field of video and video installations. She has been conducting artistic research on bees for a long time, and in her work she often makes pure connections with nature. Her work contains recurring themes, such as physical and human landscapes, water and light, memory and presence, loss and abstraction, and minimalism and formalism.

Hooykaas makes films, sculptures, audio-video installations, and has published various books. She was trained as a photographer and worked as a camerawoman, photographer and filmmaker. From 1964 to 1970 she lived and worked in Paris, Brussels, London, New York and Japan. In 1972 she started an intense collaboration with the Scottish artist Elsa Stansfield in London and Amsterdam. Stansfield/Hooykaas realised around 150 artworks, until their collaboration ended when Elsa Stansfield passed away in 2004. Their pioneering work in the field of video and video environments/installations as a new art form was exhibited internationally and has been included in many prestigious public and private collections in Europe and the US, for example Tate Modern, London; MHKA, Antwerp; GoMA, Glasgow; MoMA, New York and Stedelijk Museum in Amsterdam.

Hung Nguyen (Saigon, 1963) has by now become a well-known resident of Rijswijk. He grew up in Saigon and, as a seventeen-year-old, decided to flee because he did not want to serve in the army of socialist Vietnam. He left in a small boat and floated on the sea with 66 other boat refugees. The engine had broken down and after the first day they had no more water. On the third day, a Dutch container ship picked up the refugees. That was how Hung Nguyen ended up in the Netherlands in 1980. He was brought up as a Roman Catholic, it was only in the Netherlands that he came into contact with the Buddhism of the Vietnamese Zen monk and peace activist Thich Nhat Hanh, who passed away recently. He is an important teacher for both Madelon Hooykaas and Hung Nguyen. Hung calls his honey from the Nature Garden Dharma Nectar, by which he refers to Dharma, the Buddha’s teachings, and nectar, the sugar-rich liquid that is secreted by plants and attracts bees.

Hung specialised in ICT, but nature is his real passion. He followed several beekeeping courses later in his life, and now teaches beekeeping to young people in the Wilhelminapark in Rijswijk. He funds social projects in Vietnam with the sale of his honey and in this way he hopes to be able to give something back to his native country.

- Wim Erdle, member of the editorial board of Klankschaal, published by Stichting Leven in Aandacht

- Hung Nguyen met Thich Nhat Hanh in Plum Village (F) and has been practising meditation ever since.

Both have been practising Buddhism for a long time.

Kido is a Zen monk from the Noord Poort Zen centre in Wapserveen. He plays the kaihan (wooden board), the big bell, the shakuhachi (Japanese flute) and the transverse flute. Nga and Hung are married, together they sing folk songs from Vietnam, play the dàn tranh (zither), the tiêu and sáo

(Vietnamese flutes) and the dàn nguyet (the moon guitar).

Visitors will be welcomed by John Beentjes, president of the Nature Garden foundation. He will discuss new developments and activities in the garden. Then visitors will get a guided tour through the Nature Garden led by Elly Herbschleb, a nature guide from IVN. Finally, beekeeper Hung Nguyen will take visitors to the bee stand. He will discuss natural beekeeping and the relationship between Buddhism and ecology.

During the exhibition, the honey Dharma Nectar is for sale in the museum shop. 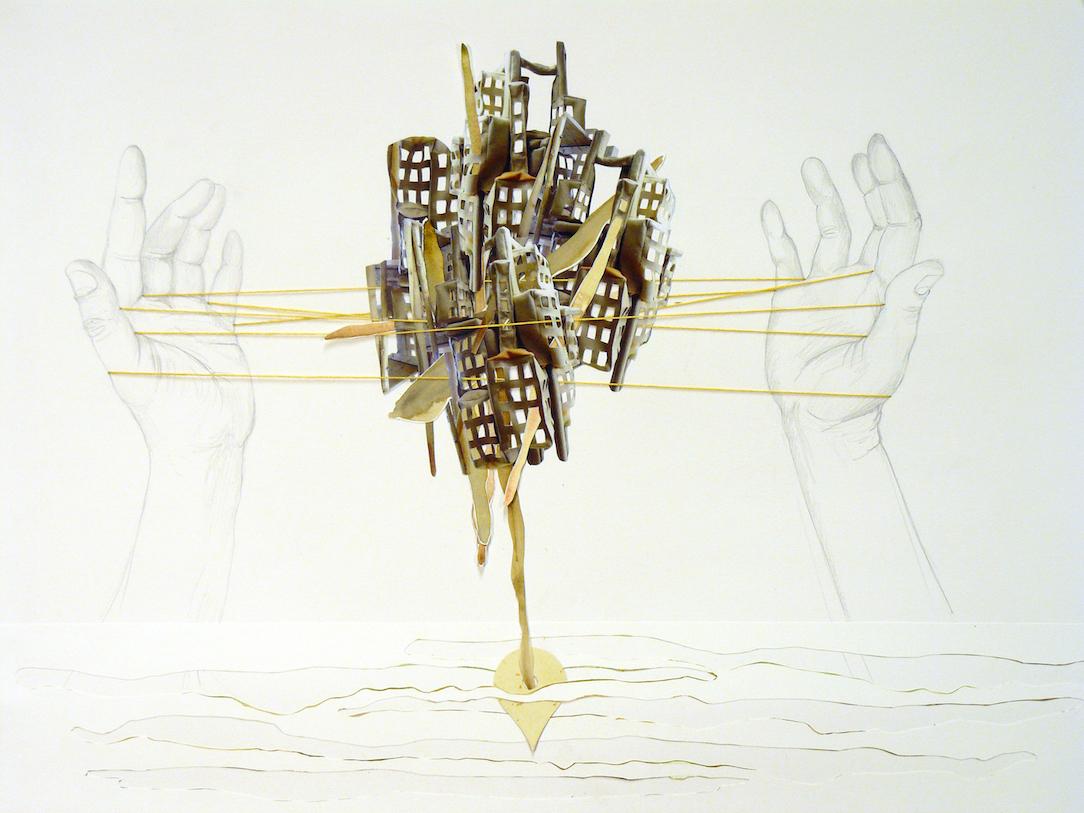 In 2020, Marianne Lammersen was selected as the public’s favourite by a large majority of the visitors to the Paper Biennial 2020. THUIS/HOME. The prize is a solo exhibition at Museum Rijswijk. From 24 April to 12 June 2022, a large selection of collages, objects and installations from the past decade is on view. Alongside the exhibition, a book will be published in a limited edition, 160 pages, 21 x 21 cm. Price: €25.

If, like Marianne Lammersen, you grow up in the countryside in harmony and with a feeling of deep contentment, the city always remains a stranger to you. As a result, she sees the discrepancies, the structured chaos and seeming coherence more sharply than a city-dweller born and bred. She uses these observations in her work to make visual analyses of our times. Using a range of materials, she builds collages, objects and installations that represent the imbalance and exponential growth of the cultivated world. She uses the human urge to build as a metaphor for the still prevalent idea of progress and addiction to the (economic) growth model. In her work, the artist interrogates this vision and suggests alternatives by letting the natural and organic confront the rhythm and regularity of fabricated (building) materials.

For the first time in history, more people live in cities than outside them. The built world keeps expanding and devours nature. The influence of humans on nature is so big that it has become irreversible. The Dutch Nobel Prize winner Paul Crutzen launched the already existing term Anthropocene for this, which means that we live in a geological period in which the influence of humans is present everywhere on earth. The imbalance between nature and culture this causes has disastrous consequences for the atmosphere and the climate. We are confronted with it in the media on a daily basis, and we notice it because of the high temperatures, the heavy storms and the floods.

So it is not just a personal experience of Marianne Lammersen, who experiences the discrepancy between culture and nature. With the works that are necessary for her to make, she addresses a topical and urgent subject.

Lammersen idealises neither city nor countryside, she moves between these poles by constructing works that balance between harmony and chaos, between attracting and rejecting. She can do this because she is a well-grounded woman who can allow for doubt because of her personal strength, and embraces alienation in her work. For Lammersen, the material has great emotional value and meaning because her artisanal choice of materials, and the time-consuming production process it entails, fulfils her wish to cherish the process of slowing down, to take herself out of the daily rat race. That slowing down is for her a necessity to examine things, to get a grip on them, and at the same time a counterweight for the excessive speed from which we seem unable to escape.

Out of the process of making, seemingly architectonic shapes emerge that are organic and tactile. They refer to the structured city, in which organic shapes are wholly absent, but where organised chaos thrives. By combining nature and culture, she not just unites what is seemingly incompatible, but creates a space for herself in which she can play with those opposites. With a non-activist attitude, but out of curiosity and surprise and sometimes also scepticism, she doubts the speed with which changes take place. Don’t we want to go too fast, and at what cost?

The exhibitions Buiten Leven (until 12 June) and Madelon Hooykaas. To Be or Not to Bee (24 April – 12 June) are also on view at Museum Rijswijk at the same time.